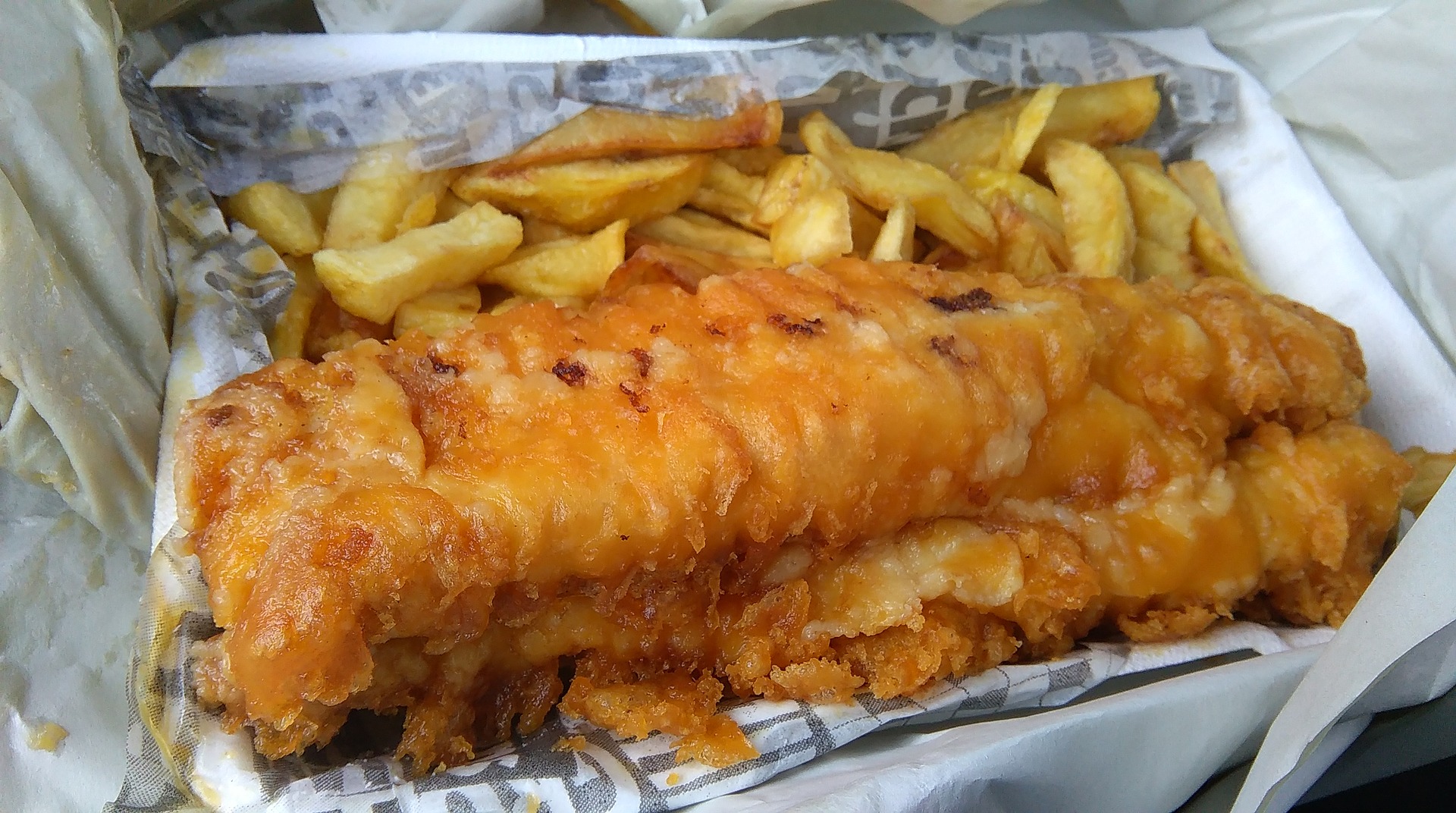 Food – it’s probably one of the most important things to know about in any language!

Aside from being essential to, well, keep living, food is something it’s always interesting to learn about when getting to know a new country. Maybe it’s entirely new dishes, or simply new ways of talking about things you already know. And Scotland is no different! So below we’ve put together a list of some words you might want to know when you’re feeling a wee bit hungry during your time here.

We start off with something you’re certain to find all across Scotland, and indeed the UK.

A chippy is a fish and chip shop, which is a place which usually serves fried fish, chips and other fried foods for takeaway or occasionally to eat in store. Most places also offer pizza and cold drinks, and some even have ice cream! In short, a chippy is a great place to pick up relatively cheap fast food, which is definitely why Scotland is so famed for its love of all things greasy and fried!

Starting off with a regional speciality, chippy (“chip shop”) sauce is generally found on the East Coast, especially in the Central Belt of Scotland. But what is it? Well, it’s usually made by mixing brown sauce (usually Gold Star Brown Sauce) and vinegar, water, or other ingredients. Individual chip shops will buy brown sauce and then create chippy sauce with it themselves, making it unique to their shop and leaving the exact recipe a bit of a mystery!

Many an East Coaster will tell you this is a delicacy they can’t go without when getting fish and chips, while the rest of the country often derides this sauce. In fact this is such a divisive issue that the BBC even produced a video covering the debate! And handily for us, they also produced a useful graphic showing where chippy sauce is sold:

If you’re in the east of Scotland make sure to listen carefully when asked what you want on your chips. If you hear “you want salt and sauce on that?” (usually said something like “you wan salt and sos on tha?”), then make sure to remember that you’re being offered chippy sauce specifically!

Most likely Scotland’s most famous dish, haggis is a savoury dish which is usually served as a main course alongside neeps and tatties (see below to find out what these are!)

Traditionally, haggis is made from sheep’s heart, liver and lungs, mixed with oats, suet, spices and stock. However, these days there are also vegetarian and vegan versions available, usually made by replacing the meat with nuts and/or pulses. You will also find new versions of haggis such as haggis bon bons at some pubs and restaurants.

Whichever type you have, you’re likely to come across haggis at least a couple of times while in Scotland, be it in the supermarket, chippy, or at a traditional event like a Burns Supper.

If the East Coast’s contribution to the chip shop is chippy sauce, then the West Coast’s is the munchy box.

Originally sold in Glasgow and the surrounding area but now found elsewhere too, munchy boxes are usually pizza boxes filled with a variety of different foods sold at the chip shop. This might include kebab meat, fried chicken, pizza, chicken tikka, samosas, onion rings, pakora, and garlic bread, along with dips and sides such as coleslaw and curry sauce.

A relatively inexpensive way of eating a wide variety of foods, a munchy box is a good choice when you want something cheap, varied and filling.

Neeps are turnips. Simple as that really! You’ll often find them served alongside haggis and tatties, in which case they’re usually mashed with some butter and black pepper.

So far we’ve mostly talked about foods eaten at specific mealtimes, but scran is what comes in between those times.

Often, scran means snacky foods, eaten between meals when you’re hungry. However, you might also hear it being used to mean eating generally, for example “let’s get some scran”, when a mealtime is close.

It’s also good to know that this word is sometimes used in the north of England too, so if you’re ever travelling it’s worth trying it out!

Also known as a Lorne sausage, or a slice, the square sausage is particularly popular on the West Coast of Scotland. They’re a common part of a cooked breakfast, and may also be found at takeaways and chip shops, as well as at butchers.

Square sausages are made with the same ingredients as normal sausages, but are not individually wrapped in a casing like normal sausages. Instead, they’re shaped into one big block which is then cut into single sausages, creating the square shape.

In the south of England, “supper” is often used to mean an evening meal (what you might call “dinner” or “tea” – see “tea” below).

While you may hear this use of the word “supper” in Scotland too, another popular meaning here and in the north of England is a smaller snack had after the main evening meal, often before bed, such as milk and biscuits. Because of these different meanings it can be confusing for native speakers too sometimes, so don’t be afraid to ask if you’re ever confused!

In a chippy, the word “supper” added onto something else means that the food is served with chips, making it a portion big enough to be a full meal for one person. So a fish supper is fish and chips, and a pizza supper is pizza and chips.

Remember when ordering food at a chippy to only get a supper if you’re feeling hungry enough for a full meal!

Often found alongside neeps and haggis, tatties is the Scottish word for potatoes. No wonder there is a special word for them, as potatoes are a very popular food here!

Speaking of Scotland’s love of potatoes, tattie scones, or potato scones, are a popular flatbread sold and eaten widely across the country. They are often triangular in shape, and are made by combining mashed potatoes with flour.

Although quite plain on their own, tattie scones are often fried and then eaten with other things – for example as part of a cooked breakfast – and are great for wiping up sauces left at the end of a meal.

Remember – these are not the same as the scones you might eat for a tradtional British afternoon tea!

Like supper, tea is a word with a few different meanings. As well as the popular hot drink, tea in Scotland and the north of England can mean either dinner (an evening meal) or lunch (a midday meal) depending on who you’re talking to and where they’re from. This can be confusing even for people who’ve lived here their whole lives, so don’t hesitate to ask if you’re unsure!

We hope that these words are useful for you, and that they’ll help you navigate conversations around food in Scotland, and maybe try something new! To learn more, why not check out our other Starter Packs?